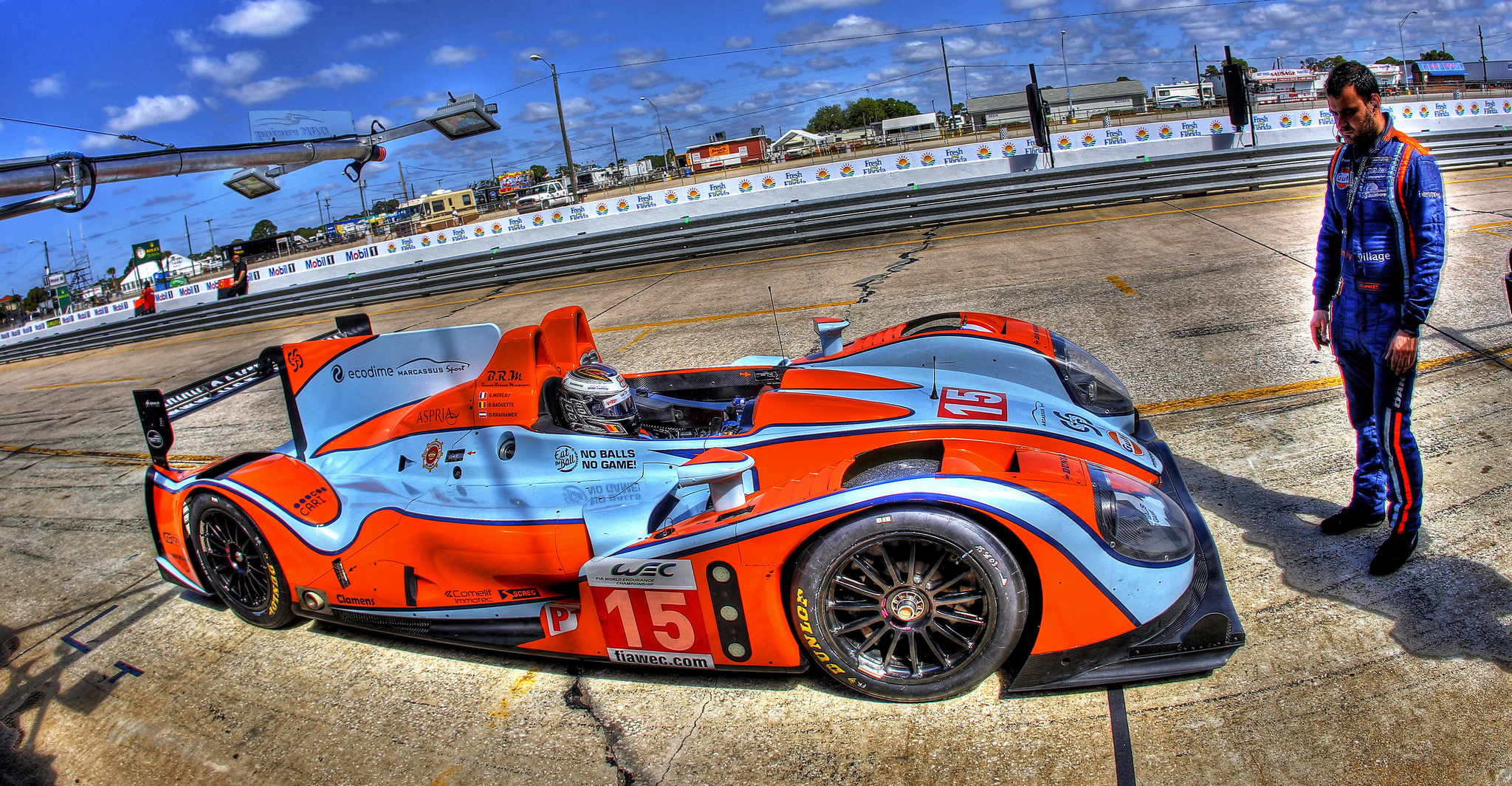 Before being recognised as one of the most professional LM P2 teams, the team had a long successful history in single-seaters.

“Promacteme” was born in 1980 in Magny-Cours, under the leadership of Serge Saulnier, and built an impressive track record in single-seaters, namely in Formula 3 in France and in the UK. It isn’t until 2006 that the team, now “Saulnier Racing”, took on their first season with sport-prototypes.

The following year, Jacques Nicolet, businessman and gentlemen driver, took over the team and gave it a new dimension in endurance racing, to which he dedicated the team. Its goal: win the 24 Hours of Le Mans. Since that moment, the team has not stopped developing.

The new Saulnier Racing team took their first podium in LM P2 with a Courage-AER LC 75 in Valencia in the Le Mans Series. This second place made up for the disappointment of retiring in the 24 Hours of Le Mans, so close to the goal, a few hours from the finish line.

After only one year of competition, the team got their first podium in the 24 Hours of Le Mans. A trio of young rising talents in motorsport had been entrusted with an LM P2 Pescarolo-Judd and three gentlemen drivers with an LM P1 Pescarolo-Judd. A double strategy, well in the spirit of endurance, which the team would make their trademark. With an average age of 24, one of the youngest teams in the history of the 24 Hours of Le Mans climbed the onto the third step of the LM P2 podium in 2008, as well as the first Chinese driver.

At the start of 2009, Saulnier Racing became OAK Racing. The oak is a symbol of solidity, strength and longevity, characteristics that endurance racing demands.

Changing the name coincided with a new strategy. The team concentrated on the LM P2 category. They invested on the international scale and surrounded themselves with solid technical partners, like Mazda. OAK Racing Team Mazda France entered two LM P2 Pescarolo-Mazda, shod with Dunlop tyres, in the Le Mans Series and the 24 Hours of Le Mans. They took part in two rounds of the new Asian Le Mans Series in Japan. At the end of the season, the team totalled 6 podiums in 8 races, including another podium at the 24 Hours of Le Mans, this time for the gentlemen drivers, as well as two victories in the Asian Le Mans Series.

In 2010, OAK Racing consolidated their links with tyre manufacturer Dunlop and became their LM P2 development team. They continued the same sporting programme with two LM P2 Pescarolo-Judd and took 4 podiums in five races. They got a second place in LM P2 at the 24 Hours of Le Mans, a third consecutive title. They pursued their international development and took the title in the Intercontinental Le Mans Cup, the ILMC, a new series launched by the ACO which would become the WEC a few years later.

OAK Racing took on a new direction in 2011. The team temporarily quit their Magny-Cours workshops and set up in Le Mans, a few metres from the circuit. They also renewed the assault on the LM P1. Three OAK-Pescarolo chassis, two LM P1 and one LM P2, took part in the full season of the ILMC. Their sport-prototypes were coated with the legendary blue and orange racing livery of Gulf Oil International, which they would keep for two seasons. For the 24 Hours of Le Mans, a fourth chassis, an LM P2, took the start. After a difficult and very busy start to the season, the team sees their work rewarded, notably with 3rd place overall behind Audi and Peugeot at the 6 Hours of Silverstone and 2nd place in the LM P2 category in the ILMC.

In 2012, the FIA World Endurance Championship, the WEC, was born, and the team continued their progress on an international scale. They ran new sport-prototypes developed by Onroak Automotive in LM P2, the Morgan LM P2. They also ran in the European Le Mans Series (ELMS).

A difficult start to the season led the team to adopt Nissan engines on the Morgan LM P2, and then the Honda Performance Development engine on the OAK/Pescarolo LM P1 for the two Asian rounds of the WEC. In LM P2, they managed to take 6 podiums, including a victory in the FIA WEC, and second place in ELMS.

And then, in 2013, success. The team brilliantly claimed a one-two victory at the 24 Hours of Le Mans with the Morgan LM P2, with Nissan engines and still shod with Dunlop tyres. They also won the Teams and Drivers titles in LM P2 in the FIA World Endurance Championship and in the Asian Le Mans Series.

That same year, Jacques Nicolet wanted to pay special tribute to the Le Mans event. He explored the links between race, art and society, and entrusted the realisation of a unique art car to Fernando Costa. The French sculptor covered an LM P2, one that claimed two podiums at the 24 Hours of Le Mans, with a coat of traffic signs, which interprets the Sarthe circuit. The sculpture was honoured with the prestigious title “Art Car of the 90 years of the 24 Hours of Le Mans”.

Following this exceptional season, the team from la Sarthe acquired experience, notoriety and recognition. In 2014, they added a string to their bow and became a support team for other teams, namely G-Drive Racing.

They also multiplied, with success, their own participations in several series on different continents: WEC, Asian LMS, and the TUDOR United Sportscar Championship. In this American championship, OAK Racing, sole European team entered for the full season, went up against Daytona Prototypes and got no less than three pole positions and four podiums, including a victory. They claimed several podiums in the WEC and won for the second year running the Teams and Drivers titles in the Asian Le Mans Series.

The team also added a new category to their catalogue, the CN. They took part in the Endurance Proto Challenge V de V with a Ligier JS 53 EVO that they drove to the Gentlemen Drivers podium on numerous occasions.

This diversification demanded a reinforcement of the team and led to a new geographic expansion. A branch opened up in Magny-Cours to devote itself to the CN category, and then the LM P3.

The team renewed their ‘turnkey’ services in 2015 for G-Drive Racing, who took the World Championship title.

For their part, OAK Racing ran two chassis at the 24 Hours of Le Mans, a JS P2 Honda, which had to retire one hour before the end, and a JS P2 Nissan, whose gentlemen drivers crossed the finish line in 11th place in LM P2.

In 2016, the team continued their services. Extreme Speed Motorsports entrusted them with the technical and logistic assistance of their two Ligier JS P2 in the World Championship and for several American races. ESM won two legendary races overseas: the 24 Hours of Daytona and the 12 Hours of Sebring. Mexican team RGR also made use of OAK Racing’s services. They are currently second in LM P2 in the World Championship.

Elsewhere, OAK Racing entered two LM P3, a new category created by the ACO, in the European Le Mans Series, for two teams of gentlemen drivers. The two duos finished all the races and ended the season in 15th and 19th in this category.